What a difference a year makes! The renovation of the study and bathroom are finished.  It all came together just before Christmas but various things – like dropping the computer and full on festivities has put life on hold for a bit. No bad thing.

This is the best before photo – taken a little late, when the room has already been partially cleared, but it gives a sense of the layout.  On the left, slightly blocking the photo is a big, black glass fronted bookcase that held an enormous amount of precious crap.  The idea was to open up the room by moving it to the right hand corner by the desk, allowing in more light.  This meant that both the shelves had to move and we finally had to sort out the pipes and tiles left by the ghost of a sink: When we first bought the house, this room was our kitchen.  It’s next incarnation was nursery and finally study.  The sink was from the days of nappy changing and bloody useful it was too.  The carpet was the first we ever laid in the house – just a week before Bella was born to celebrate it’s transition to nursery.  Unfortunately when I went into labour and disappeared to hospital, Molly the dog had the raging squits all over it and it never quite recovered…in truth it was a joy to rip it up and take the room back to bare floorboards.  The fireplace surround, leaning against the wall was going to go where the bookcase was, with a mirror on top to bounce light..important as this room was going DARK!

The other problem in the room was this cupboard – the only original cupboard left from when we bought the house nearly 15 years ago.  Originally part of the kitchen (although you can still see the wardrobe rail from it’s days as part of a nursery)  We now use it as a present cupboard, to store printer inks, paper and the printer.  Except the the space is terrible for storage and printer didn’t fit so the door was permanently open…

First step of the renovation: pulling up carpet and fixing the new fireplace surround, bought for a very pocket pleasing 99p on Ebay. 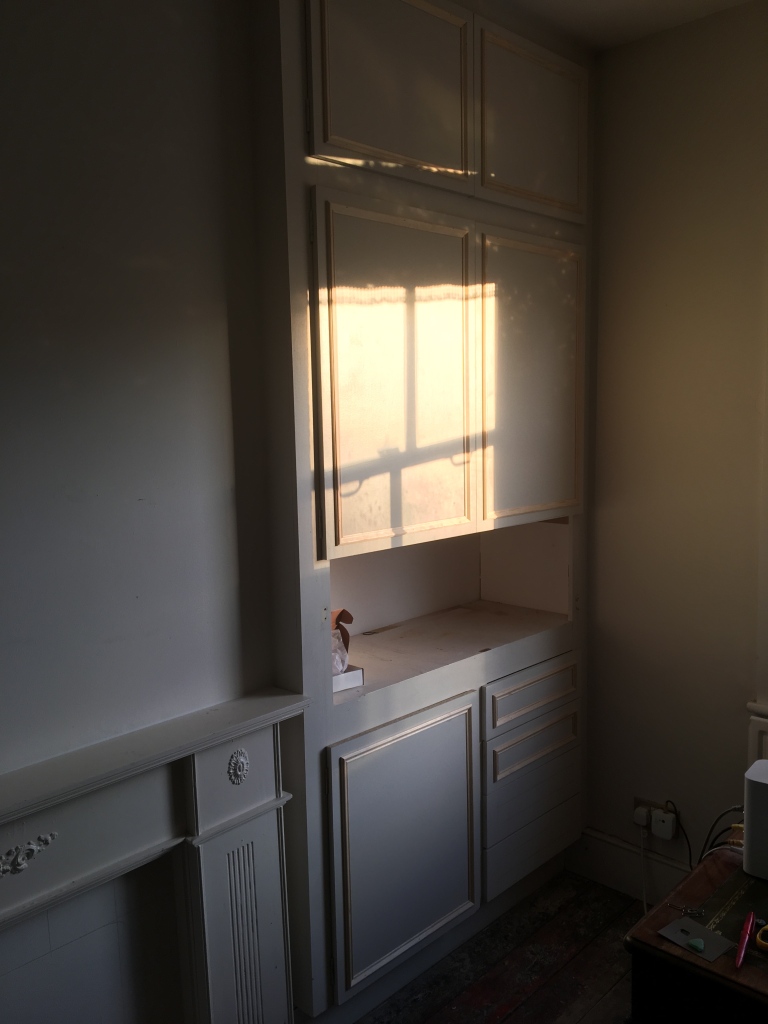 To solve the problem of the cupboard we cut down the two main doors and filled the internal space with shelves.  To update them we had beading fitted on all the doors and drawers. Very simple, very effective. 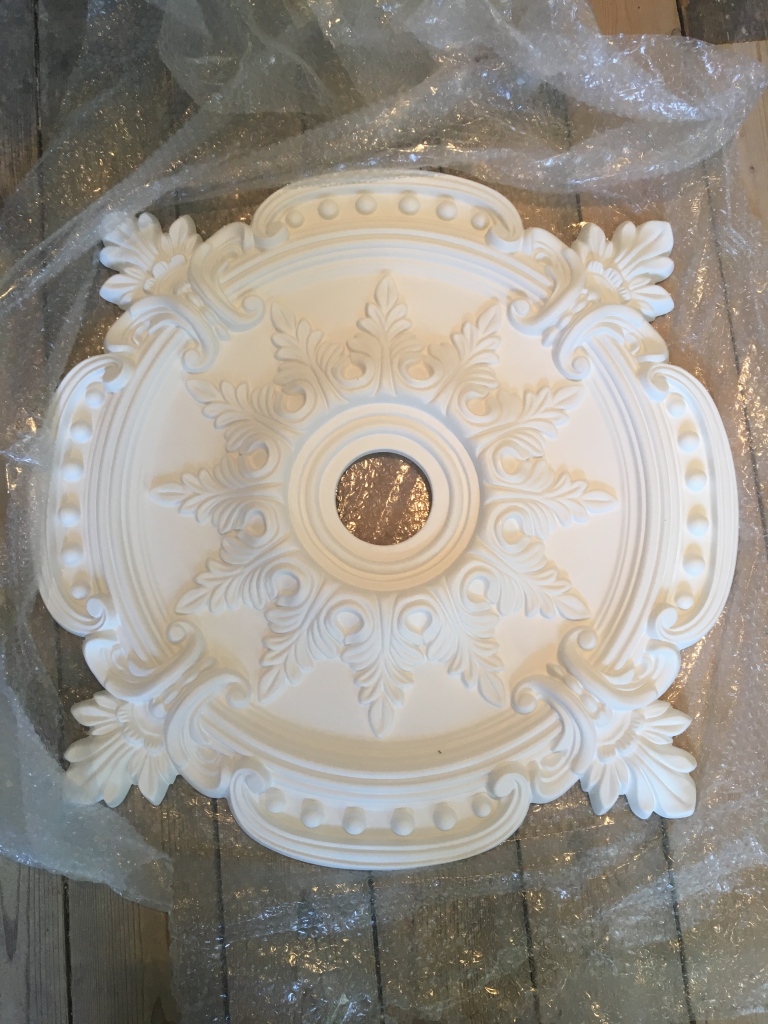 The inspiration for the room was Victoriana meets Spitalfields, and whats more Victoriana than an ornate ceiling rose? 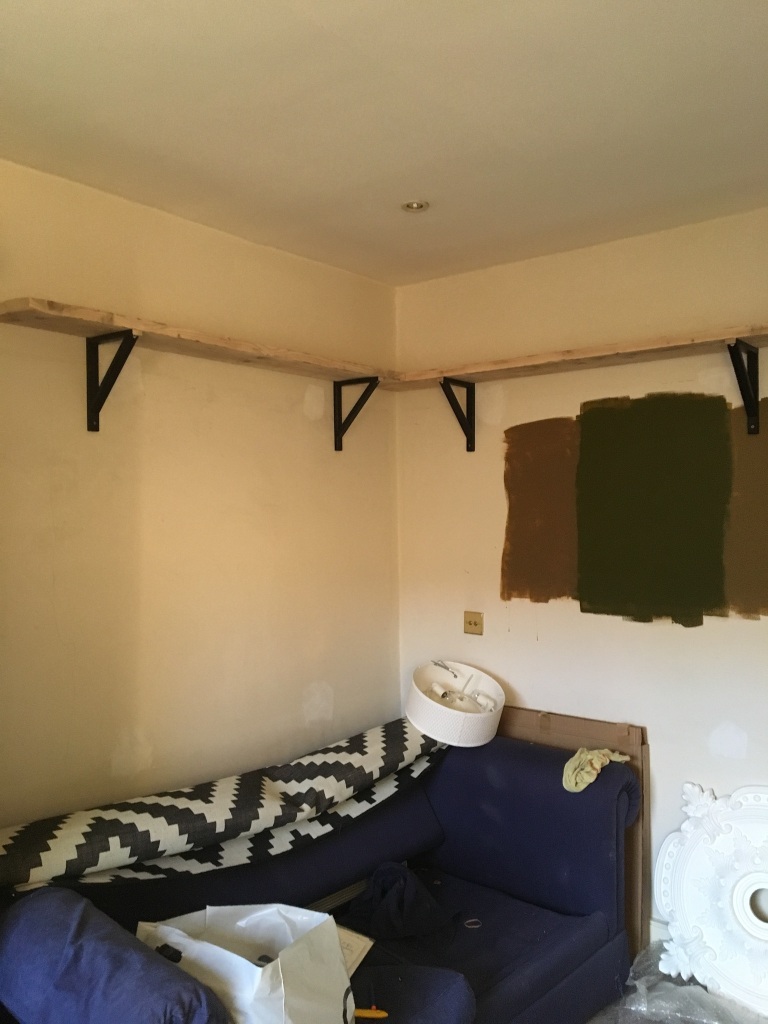 Over the other side of the room, the shelving was re-imagined. 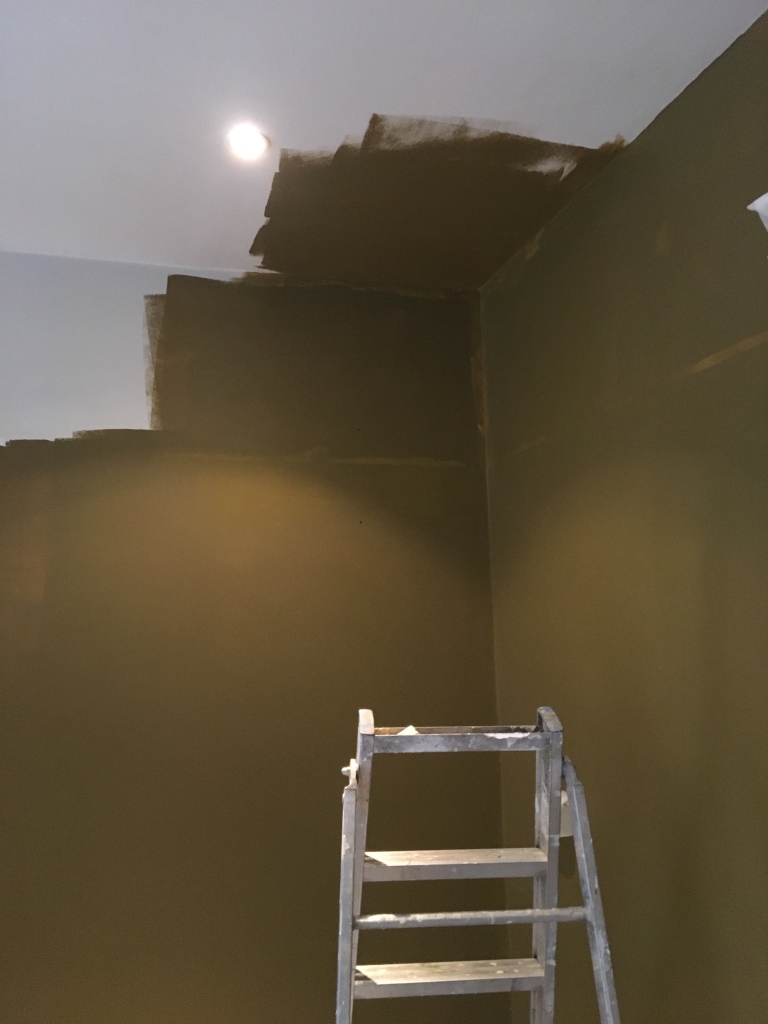 And now for colour…shit brown with a hint of green! Interestingly it comes out more green in the photos.  I will confess it was scary painting it on for the first time, particularly with memories of this paint in mind – and it’s the first time I’ve painted a ceiling dark…terrifying…I really didn’t want to have to paint that white again! 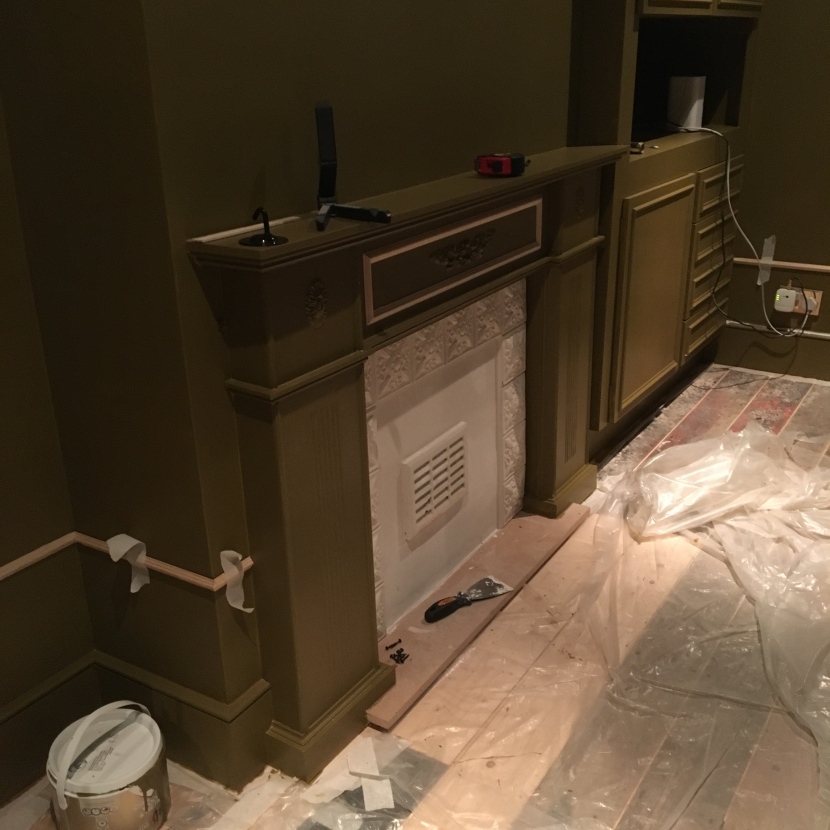 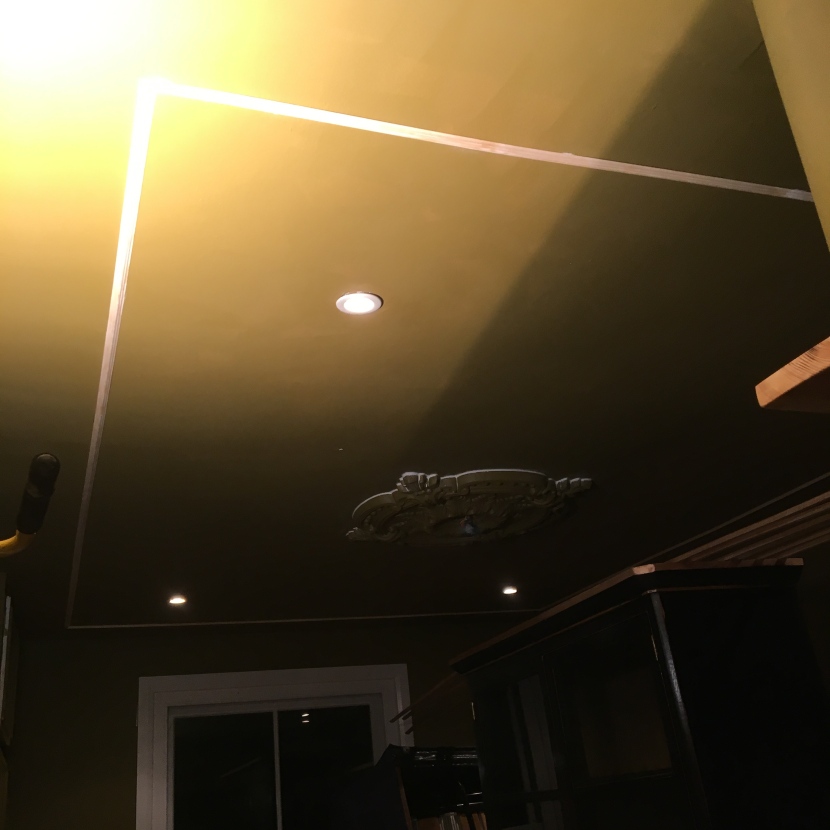 We also took the beading up to the ceiling, creating a rectangle around the lights and rose. 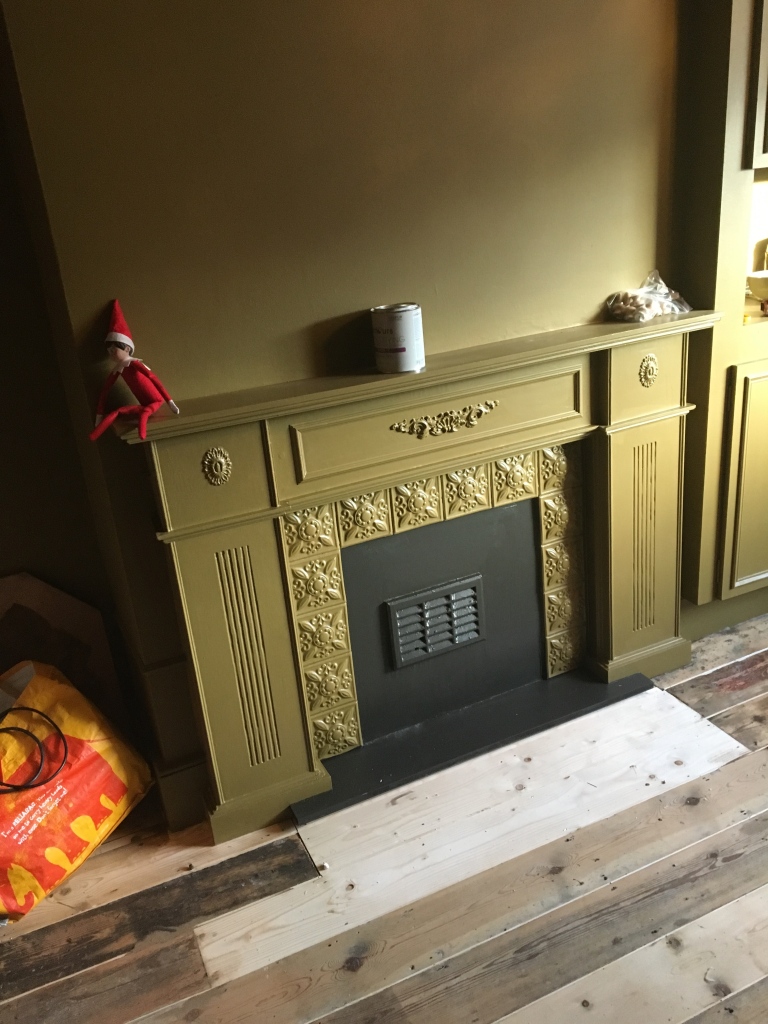 Then everything – and I mean everything, was painted.  Recognise the inlay on the fireplace? Came from the tiles on the wall from the ghost sink…all cunningly recycled.

Floors varnished and furniture moved back in.  Even the chair was given a new seat cover made from a bit of kilim.  The light was recycled from Bella’s room where she didn’t appreciate it’s vintage charm – she now has the boring Ikea one that was in here.  Looping it so it hangs over the desk makes a great visual statement.  The rug has made it back – there was thoughts of dying it but it’s just the wrong type of material and it compliments the room well.  Maybe when there’s some more dosh in the pot it will change to a battered kilim. The colour has been a revelation – it creates such a calm, centred environment that pulls you in – it’s an oasis of peace in a busy house.

The mirror was our Christmas present, bought on Ebay for a bit of a bargain and I love it.  The handles on the cupboards are just cheapy wooden ones painted to match.  Now I can sit in my chair and imagine I’m silk merchant from the eighteenth century.  The printer now sits happily and the storage in the cupboard works. 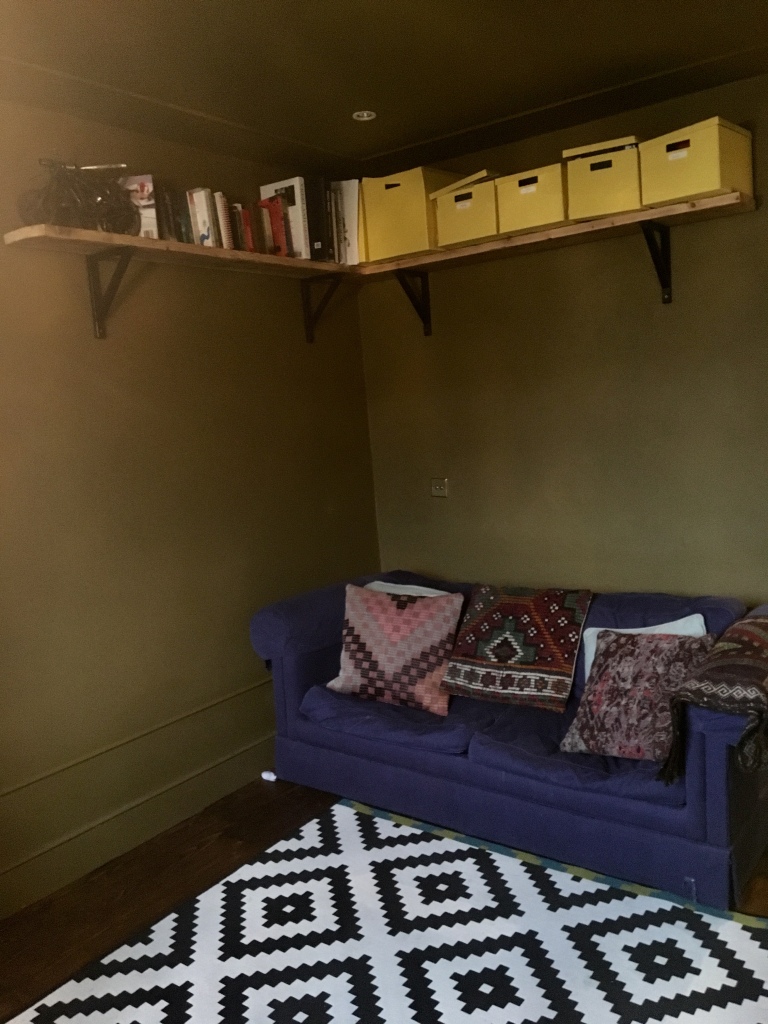 On the other side of the room, the shelving is much better positioned and the sofa bed is back in:  The blue sits very happily with the shit brown.  Not only is it a great place to read a book, it gives the room a double function if we ever have extra guests coming to stay.

And this one has been properly organised. 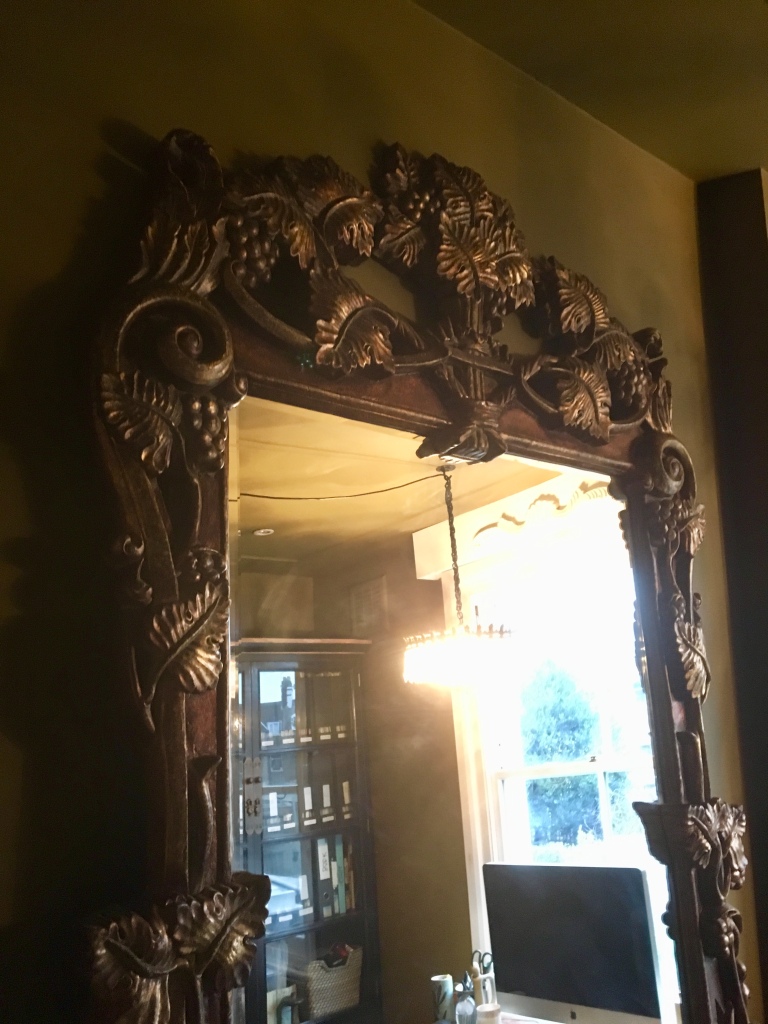 A great success was the window treatment.  Originally we had a striped roman blind that covered a portion of the window.  We’ve replaced it with a roller blind (approx £40 made to size) that’s been hidden in this specially made window box.  The wooden decoration was originally intended to go over a door as a pediment, but had never been fitted.  It now has a new life! Now the window is a true statement and is the first thing you see when you walk into the room. 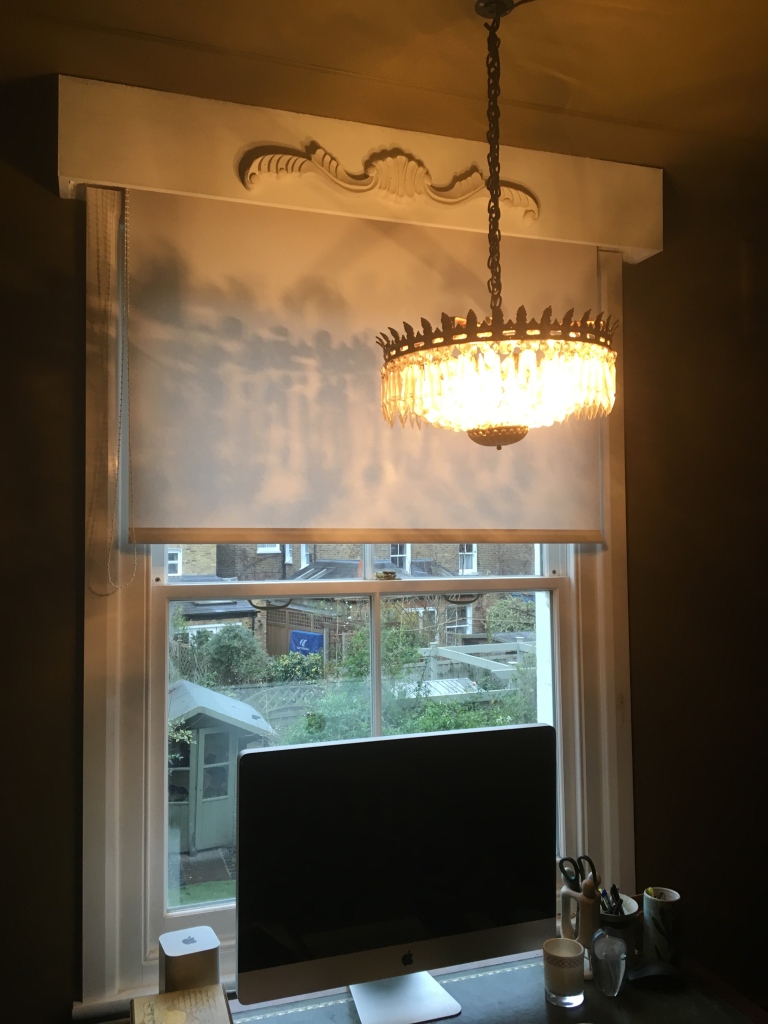 When the blind is up, it’s invisible, when it is down, it’s a simple, tasteful white. 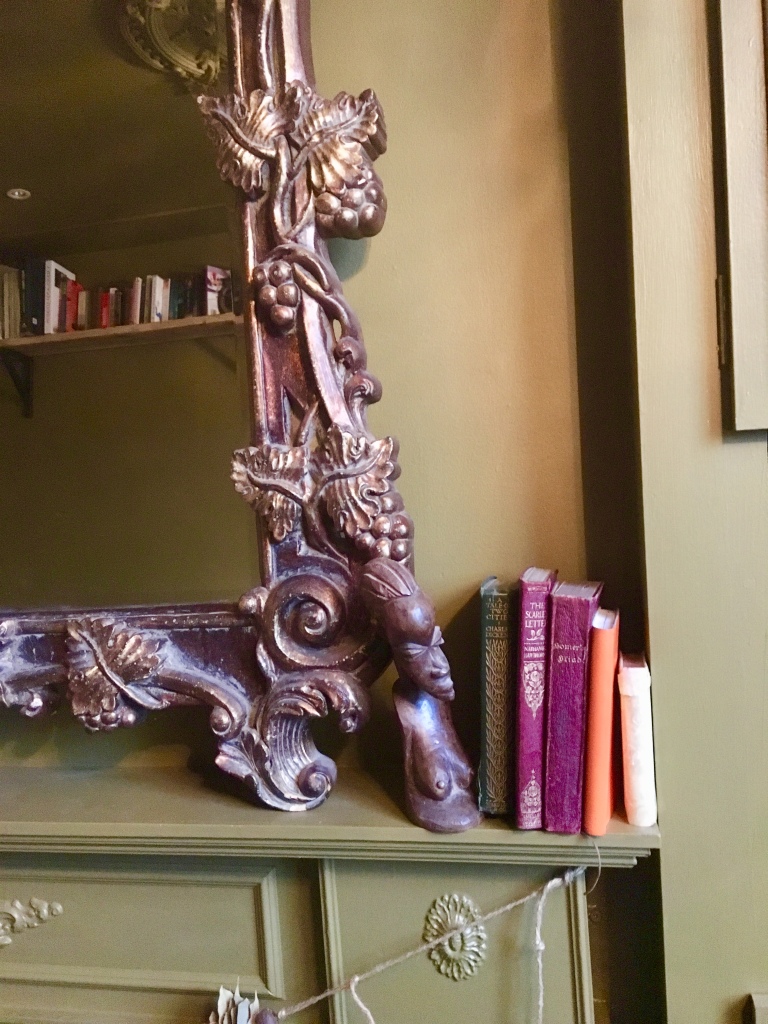 All in all, it couldn’t have been more successful!