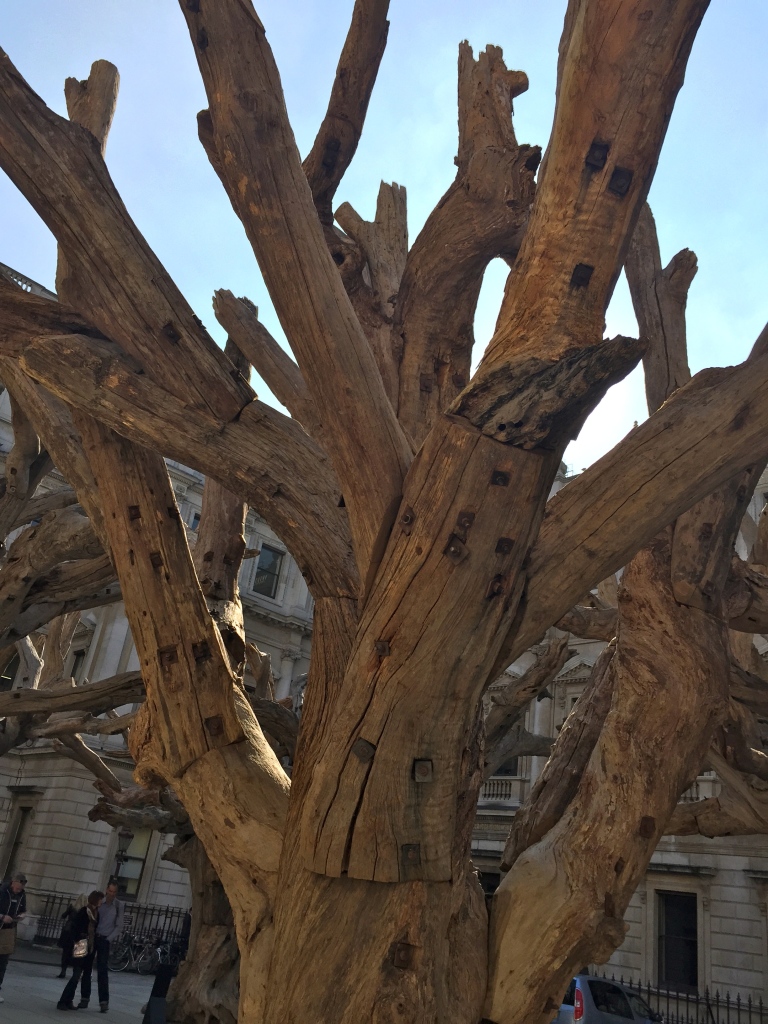 On Friday I went to The Royal Academy of Arts to experience their Ai Wei Wei exhibition and attempt to understand what makes China’s most recognisable yet contentious (Google his name in China and nothing will come up) artist tick.  It’s a brilliant and interesting exhibition where each exhibit, like the best art, holds a powerful message that’s greater than the sum of it’s parts.

Like ‘Straight’ a gigantic installation made of 150 tons of rebar salvaged from the site of the 2008 Sichuan earthquake and then painstakingly straightened.  A labour of love, now laid out in broken undulations recalling fault lines, it tells of sub-standard building practises, even in the provinces schools, due to rapid expansion and state greed..and the tragic consequence that had for thousands of lives. 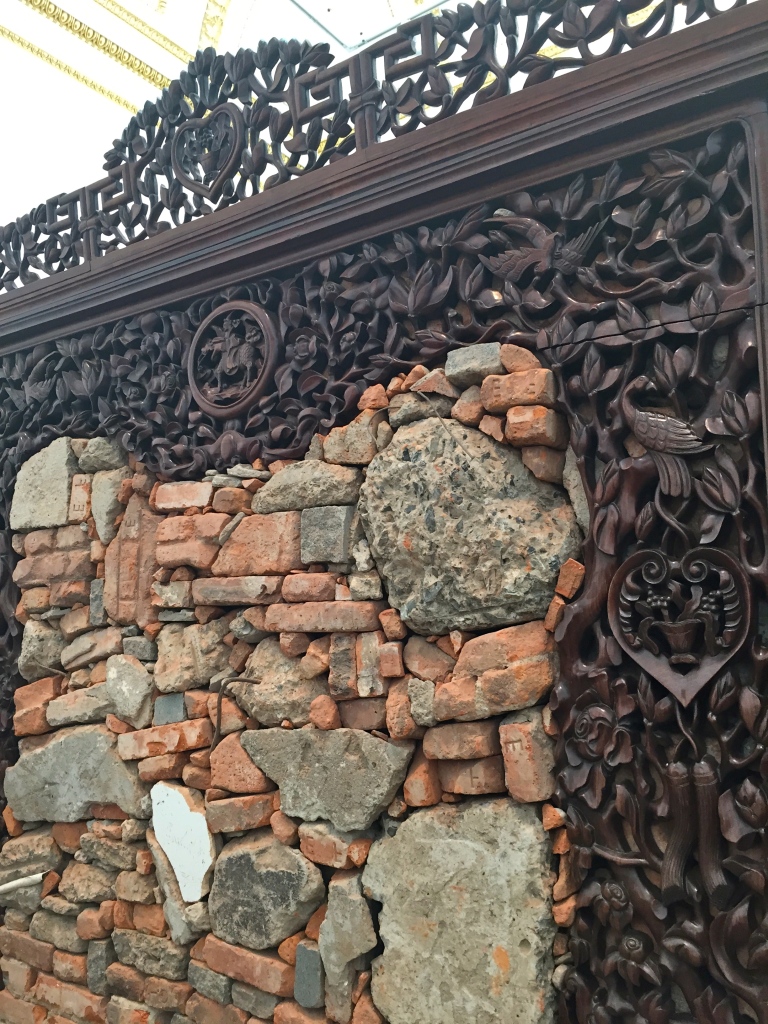 ‘Souvenir from Shanghai’ is made from the concrete and brick rubble saved from the artist’s studio which was destroyed under a trumped up planning charge by the authorities.  Through the art, the story is told and immortalised.

‘He Xe’ both means river crab and harmonious..’harmonious’ is a key concept with the Communist party with their continued aim for an harmonious society no matter what. This play on words, exquisitely made from porcelain and hand painted, is a cultured two fingers to the governments attempts at quashing freedom of expression.  It’s also what 1,000 of Weiwei’s friends feasted on the night before the Shanghai studio was razed to the ground.

The art is compelling and full of contradictions, sub clause upon sub clause: Manmade versus nature versus human nature versus control, every element down to the source of materials a piece of the puzzle. Yet, I have to confess to a grain of sand in my shoe.  Weiwei’s talent is bringing the human touch to conceptual art and it’s certainly a powerful thing to be able to make ugly things beautiful and change rubble into gold.  But many of the exhibits were stunningly crafted out of prized and expensive material like this pair of immaculately carved jade handcuffs, quietly stating that beautiful things can be ugly. But the pleb in me wanted to know where the money came from to purchase such expensive materials? and more importantly, who were the master craftsmen who physically created these pieces? 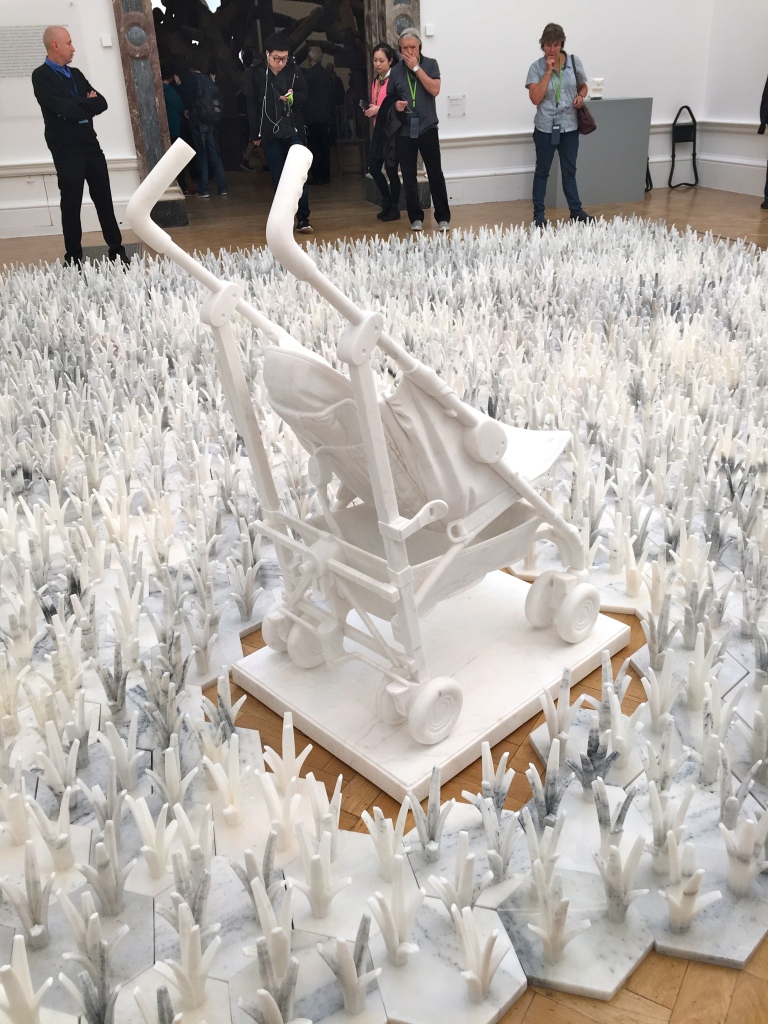 We all know that large studios umbrella the workers beneath, but who actually carved the marvel that is this marble push chair above? In an age when we don’t have time (and possibly the money) for fine craftsmanship, it was a modern joy to see. Maybe it was an administrive error – at Weiwei’s sunflower seed installation in the Tate, every worker was acknowledged so call me a cynic, but I just had a feeling there was a hint of ego stalking these galleries.

That’s not to say you shouldn’t go or it’s power is dimmed: Rarely has such simplicity sung with such complexity and great calmness.

Go – because if nothing else, it confirms the truth that art will always conquer censorship by the simple strength of it’s vision, the connections and the memories it makes.